WILMINGTON, N.C. (WECT) - Good Friday evening to you and thanks for checking into your First Alert Forecast for the Cape Fear Region!

The first half of the weekend should feature low, but non-zero rain chances as Atlantic moisture moves in. Outdoor activities should be a go, under partly cloudy skies Saturday, but under mostly cloudy skies Sunday and beyond. This is thanks to a sluggish cold front approaching from the west and awkwardly stalling nearby Sunday through Halloween. Medium range modeling data suggest that this front won’t get the needed upper-level support to clear out, until early November. This slow progression will imprint several days of warmer-than-average temperatures and shower chances into your seven-day forecast for Wilmington.

The National Hurricane Center is keeping tabs Post-Tropical Cyclone Olga, which formed as of 5 p.m. Friday in the Gulf of Mexico. It’s remnants will move north northeastward over the central United States this weekend. and should dissipate by this weekend.

Elsewhere in the Tropics: the National Hurricane Center is tracking newly formed Tropical Storm Pablo near the Azores. The system is producing showers and thunderstorms along with tropical-storm force wind gusts. It’s movement is to the east northeast, so this would not pose a threat to the Carolinas, let alone the US.

Remember: you can dial up a ten-day forecast tailored to your specific location on your free WECT Weather App! in the meantime, check out the seven-day planning forecast for the Wilmington metro. 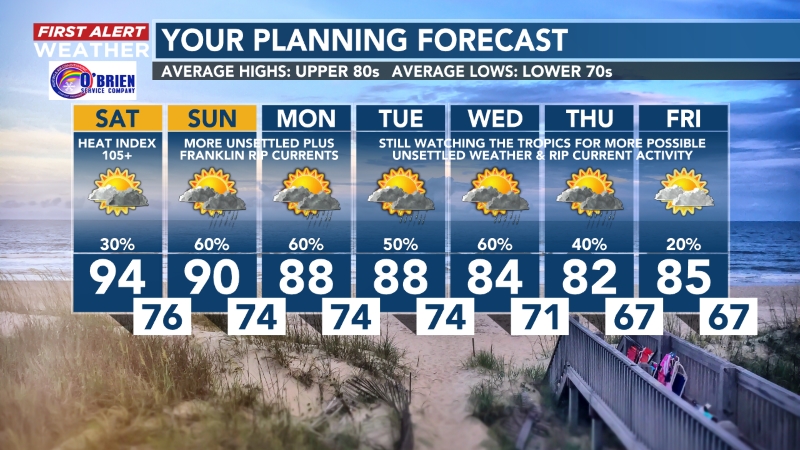 Gabe Ross Joined the WECT team in 2015, working behind the scenes as the News Operations Manager. But he’s no stranger when it comes to weather forecasting.

Tropical storm formation and Cape Fear Region impacts appear unlikely through the big holiday weekend - which is awesome - but we will still have a little day-to-day summer weather drama...
By

First Alert Forecast: stormy and toasty in the short term