WILMINGTON, N.C. (WECT) - Happy Sunday to you! I hope you’re enjoying your weekend so far! High pressure is still dominating our weather pattern, meaning, the Carolina blue skies are sticking around with low rain chances!

High temperatures will get into the low to mid 80s this afternoon with lows dipping into the mid to lower 60s. Temperatures will gradually start to increase through the week, with highs getting back into the upper 80s to around 90 closer inland.

In the Tropics, a new tropical storm in Karen formed overnight. it’s siting off the Venezuelan coast. It’s not likely to strengthen much in the next couple of days but by midweek, conditions are looking more favorable as it encounters a lower shear environment. Tropical Storm Jerry continues to churn as it moves northeast of the Bahamas. The storm is expected to remain a Tropical Storm based on the latest modeling runs, but should still hook north before reaching North America. You can trust that we’ll stay on top of both of these track. Also of note, we could have a third tropical storm or depression later this afternoon off the coast of Africa later today as a wave shows better organization. it would get the name Lorenzo should it do so. You can read more about what’s happening in the Tropics here. 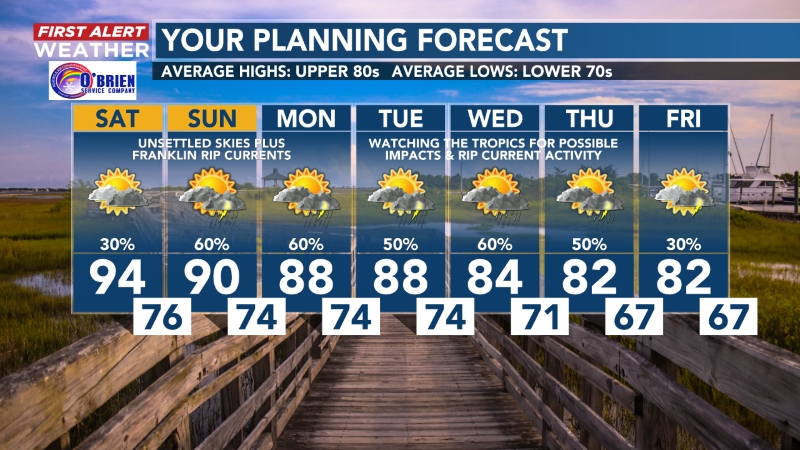 Gabe Ross Joined the WECT team in 2015, working behind the scenes as the News Operations Manager. But he’s no stranger when it comes to weather forecasting.

Through the weekend, a strong summery high pressure ridge will drive the pattern. Occasionally, storm-clouds will punch up through the ridge, but sizzling, sunny days and sultry, sweltering nights will be the rule.
By

First Alert Forecast: plenty of heat and storms in the days ahead

First Alert Forecast: plenty of heat with a couple of important side stories